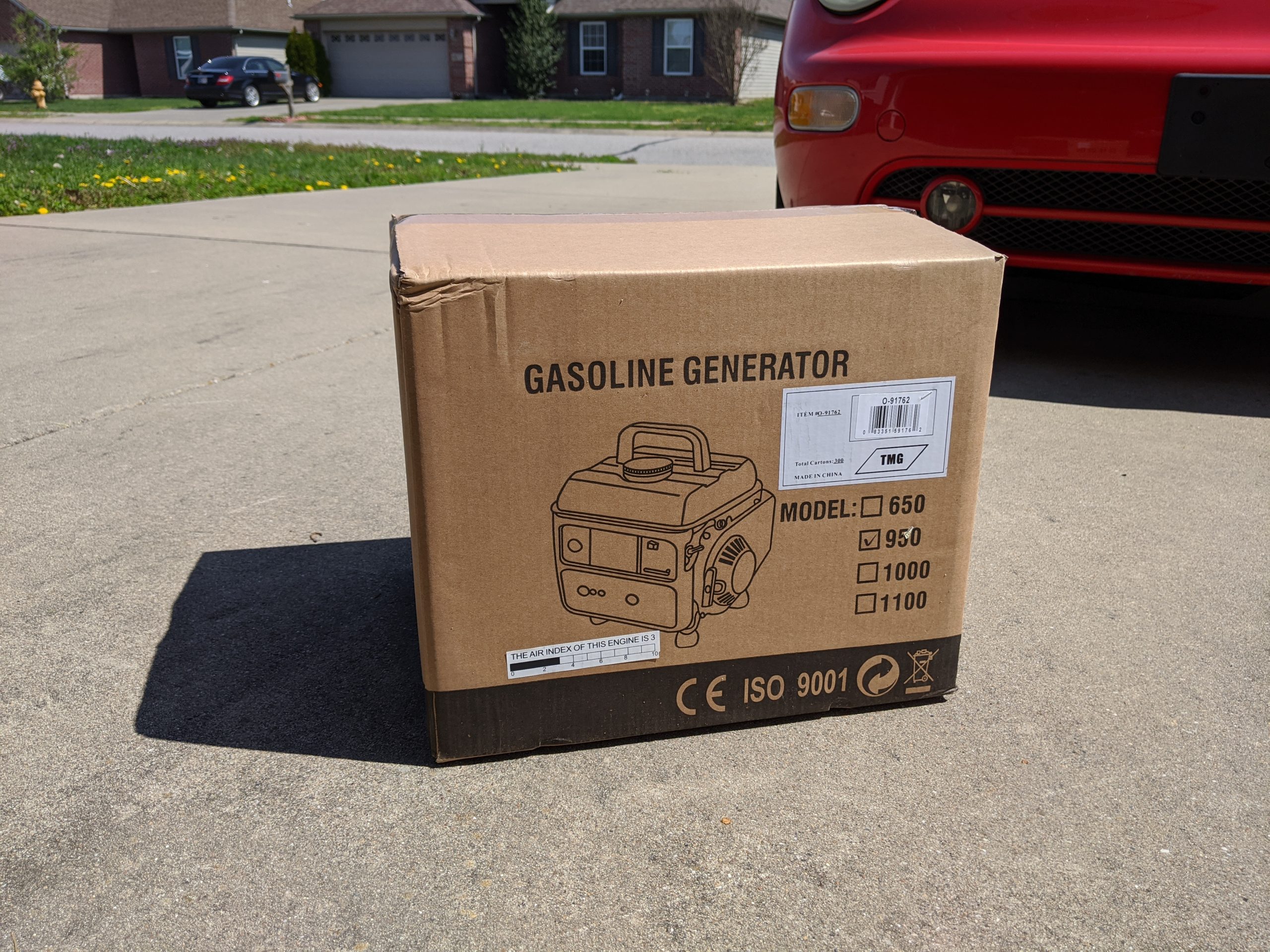 (Administrative note: We started our travel-triggered isolation on March 13th and it ended on the 27th. However, on March 25th Indiana went on stay-at-home via Executive Order 20-08, so we are still effectively locked in until April 6th – now updated to at least April 20th. The tl;dr is that this is actually more like SAH Day 23 for us, but I’m only counting the time since we ended isolation).

By this time, panic buying has mostly subsided, and supermarkets are close to fully stocked. There are some exceptions to this (paper goods, sanitizers, bleach, denatured alcohol, PPE and the like), probably reflecting what is at least a temporary new normal of genuine supply chain shifts. In general, however, people seem to have realized their storage space isn’t infinite and they are buying a relatively normal time-averaged quantity of household consumables.

Unfortunately, since we are all in lockdown, the number of store visits per month is greatly reduced – which means that at any given time, most families probably have more groceries on hand than they normally would have pre-crisis. Certainly in our case, both the refrigerator and freezer are fully stocked, and (as one does in time of crisis) we felt a bit safer knowing that we had at least a week or two of food on hand.

And then, around 2010 on Saturday March 28th, an EF2 tornado popped up and frolicked across my little corner of Indiana. Having lived in Florida for so many years, I had become accustomed to days or weeks of notice for hurricanes; I’d forgotten how tornadoes can just appear and suddenly the sirens outside are howling and the TV is telling you “it’s headed for your street, and you have about 10 minutes”. We didn’t suffer any damage, luckily – it was pretty exciting not too far away, though – but besides needing to huddle on the floor in the hall for an hour or so, we lost power from 2030 to about 0350. I stayed up all night waiting for it to come back on, so I could measure the temperature in the fridge and freezer. It was nail biting knowing the food was all slowly warming up and there was nothing to be done. When power returned, the top shelf in the fridge reached ~50°, lower shelves were ~40°, and much of the food was salvageable. (The freezer compartment of the fridge was in the high 20s, and the outdoor freezer was in the low 20s).

We lucked out there, but I decided I’m never going to be caught out in the silly obvious ways again. On the other hand, I don’t have thousands of dollars to spend on prepper gear (nor the room to store it).

For the electric situation, I initially decided to buy an inverter, so I can use one of the cars as an extremely inefficient generator in a pinch. This inverter was ~$20 shipped (from eBay) and while it’s really designed to power things like laptops, it will nominally handle a moderate fridge or freezer. However after I purchased it, I thought a little more and realized that I have no idea what kind of sinewave emulation it has, nor its ability to cope with hard-starting inductive loads. Not to mention that this approach will burn probably 12 gallons of gasoline a night, besides being less than ideal for the car. So I’m keeping this inverter as what you might call a tier 2 emergency solution, but I needed to shop for a cheap generator also.

I would normally have shopped Craigslist for a used model and perhaps done some light refurb work (these small engines are pretty easy to work on – check out Mustie1 on YouTube for some great videos), but due to the pandemic situation shopping around like this wasn’t really feasible. So I wound up buying a super inexpensive ~$120 shipped 900W (ish) 2-stroke generator online. The screenshot above is clickable through to the site where I bought it, but the page may of course go stale at some point.

The reason I describe it as 900W ish is because the exact same unit is sold, under various brands, as anything from 800 to 950W. The specs I believe the most are 800 running watts/900 starting watts, <68dB noise level, 1.2gal tank, 8.5 hour runtime at 50% load, 1x 120V outlet and 1x 12V outlet (cable included for battery charging). With a 5gal can of gas and 13oz of 2-stroke oil, I can keep the fridge running for around 36 hours. I ordered two bottles of 2-stroke oil (stabilizer is included) and a 5gal gas can from Amazon, and now I have everything I need except fuel. This is the best tradeoff for me; it might not be the best tradeoff for you. I want this generator ONLY to keep my food cold for a short period of time, and I don’t want to spend $500+ on an over-capacity generator that I will use infrequently.

A brief sidebar is necessary in case you’re not cognizant of the nuances here. Small 2-stroke engines (used on things like lawnmowers, leaf blowers, and very small generators) have what’s called a total loss oiling system. Instead of having a separate oil system for cooling and lubrication, you simply mix oil into the fuel tank and it all burns up. The mix ratio is stated on the motor’s data plate; for this engine it’s 50:1 gasoline to oil (though the first 30 hours of run-in require more oil, 30:1). But this is only part of the picture. Gasoline does not last forever, especially in a non-airtight system; the lighter fractions evaporate, and modern E10/E15 gasoline contains ethyl alcohol which absorbs water out of the air. Bad news bears for your engine. Best case, if you leave it fully gassed up, you’ll have a clogged carburetor full of shellac when you need to run the generator a year from now. Worst case, the water in the ethanol will have corroded the fuel system. So it’s best not to leave the carburetor full (ideally, not the fuel tank either) for long periods of storage. But even the gasoline you put in a sealed can will go bad after a while – the oil companies recommend using it within a month after pumping. So there are additives – Sta-Bil is probably the most popular – that you can add to gasoline to extend its shelf life to “a year ish”. Most 2-stroke oils now contain these additives, but if you don’t have any other use for the gasoline, and you’ve added the oil to it already, you have a disposal problem – you don’t want to burn oil-mixed gasoline in your car. So you either have to buy your gas just when you need it, or establish a cycle for burning or disposing of old gas periodically. If you have a lawnmower, snowblower or similar appliance that lets you continue burning and replenishing your garage gas supply through the year, you’ll be fine of course. But since I don’t, I can confidently say: readiness is a pain in the butt.

This takes care of the fridge situation, but I also didn’t have ready access to emergency supplies in this outage – nor did I have a bag’o’stuff packed in case a tree fell on the house and we needed to evacuate. So I’m making two backpacks and a catpack of emergency supplies, sourced on a variety of sites but mostly eBay and Amazon. Note that I don’t particularly have a paramilitary fetish, but there’s a distinct advantage in buying equipment that has an NSN – that advantage being, there’s probably a billion of them on the surplus market, and you can buy exact replacements easily. Similarly, rather than rolling a one-of-a-kind storage solution, using MOLLE II compatible equipment means a plethora of standardized, reproducible options. Also, I do like olive drab, sand, and ACU colors :D.

The list below is inclusive, but not exhaustive – it is cut and pasted from my first-draft notes, and has had additions.

The following items (again, duplicated in each pack) have a shelf life and need to be checked or replaced annually:

The catpack is ideally packed inside the cat carrier box, and contains:

Note that these are not some kind of prepper kit designed to let you live off the land for weeks. They’re intended to be a bag full of the stuff you don’t want to have to run around looking for, if you need to evacuate the house in a hurry and stay away in a hotel for a week or two. The idea is you grab medications, cellphones, wallets and the backpack (and the cat!) and get in the car. The kit contains: